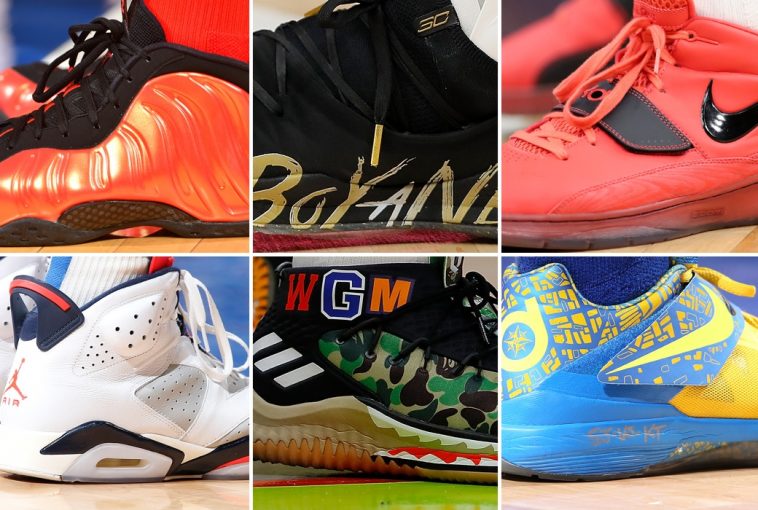 Stephen Curry debuted a new Under Armour Curry 5 colorway in the Warriors 128-111 victory over the Hawks Monday night. An all-black colorway, this latest iteration features the word “BOYANEK” in gold lettering across the shoe’s lateral side which is styled after a tattoo that both Curry and his father, Dell, both have on their forearms. The term, which is a short for “bow your neck,” is what the elder Curry would tell his son during difficult times.

Jeff Teague has always had a solid sneaker game, but as the T-Wolves welcomed the Rockets and the sneaker king P.J. Tucker, it appears Teague went extra hard as he donned a trifecta of heaters. In pre-game, Teague shot around in the Nike Zoom LeBron II then took the floor in his familiar Nike Air Zoom Generation Retro before finishing up in the Nike Zoom Kobe 6 Prelude. Tucker went with a vintage KD model as he brought out the Nike Zoom KD II Supreme “All-Star” from 2010.

Other footwear highlights on the evening included Stanley Johnson going the vintage KD route as well as he wore the “Scoring Title” Nike Zoom KD IV, Markieff Morris got spicy in the “Habanero” Nike Air Foamposite One, John Collins went with the BAPE x adidas Dame 4 and both Montrezl Harrell and Jerami Grant both took the floor in the Air Jordan VI Retro with Grant rocking the “Tinker” edition and Trezz in a “Kids Next Door” custom.

With close to 40 kicks from last night’s NBA games, you won’t want to miss out on the latest recap below.